The Lies of Locke Lamora review 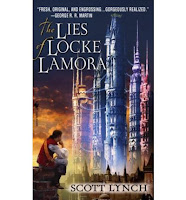 Synopsis - from the back of the paperback edition (publish. is Spectra Books)

"An orphan's life is harsh - and often short - in the mysterious island city of Camorr. But young Locke Lamora dodges death and slavery, becoming a thief under the tutelage of a gifted con artist. As leader of the band of light-fingered brothers known as the Gentleman Bastards, Locke is soon infamous, fooling even the underworld's most feared ruler. But in the shadows lurks someone still more ambitious and deadly.

Faced with a bloody coup that threatens to destroy everyone and everything that holds meaning in his mercenary life, Locke vows to beat the enemy at his own brutal game - or die trying..."

This is not a recently released book, but I'll gladly write this review to convince even one more fantasy reader to pick this up.

As you can see from the synopsis, the book starts off with yet another orphan living a miserable life. Though it's a well paced book, I feared for a boring sob story before the plot would start. How wrong I was :D!

Characters
Locke is a really fun main character, even as a child. He does the most ridiculous and amusing things when trapped in a corner and is far too witty for his own good - which doesn't change for the better when he's older, actually.

Not just Locke, but the other characters had a nice depth to them as well. You will probably grow to like the Gentleman Bastards, since each member has a nice personality and cool involvement in the story, though some maybe a little later than others (I'm looking at you Jean). Even the minor characters were interesting in their own ways.

On the other hand, the main villain's motives and behaviour weren't that surprising or amazing, but they're interesting enough. At least he's more than just a cackling idiot and shows more than two kinds of emotions.

Story
During the entire book, the plot keeps its nice pace up and keeps getting more absurd, more dangerous and more awesome. The many ways in which conflicts and problems get solved (or get worse) are great to read and contain a lot of twists along the way, which will either make you grin or scream in agony. Especially when shit hits the fan... multiple times in a row :'). From that point on, I'm sure anyone will have a hard time putting the book down, as it becomes very engaging. Though, the author also has a nice sense of humour, which shines through here and there and lightens the mood.

World
As for the world and its laws, I liked seeing Locke and his friends having to adjust to different cultures in their profession and how the world itself and events that took place in it were neatly intertwined. That is, the places introduced were interesting, but also well used. You were also told various things about the world when it mattered and when you cared. Not only world building was done like this; there were some awesomely timed interludes as well, which wouldn't have worked quite that good anywhere else in the book.


Finally, the only reason why I'm not recommending this book to everyone I meet, is because some pretty awful and sometimes gross things happen to the characters. Not to say it makes the book worse, just something to keep in mind when you consider personal preferences and age. If that doesn't bother you, for the love of all twists and thieves, read this!

In conclusion
I highly recommend this book if you like fantasy and witty rogues digging their own graves. If you're OK with the occasional cruel deeds to the characters, you will enjoy and appreciate this book and its 700 pages.


- More info
- Buy at the bookdepository or on amazon

Email ThisBlogThis!Share to TwitterShare to FacebookShare to Pinterest
Labels: book

As spoiler free and short as I can :).

Why?
I just like sharing my thoughts on these and spreading the love.

Though beware, when content is so astonishingly bad that it makes me want to travel back in time just to avoid myself from reading it... my review will be ruthless.